In their master plan for Central Park, the 1858 “Greensward Plan,” Frederick Law Olmsted and Calvert Vaux proposed an architectural “heart of the Park” defined by a sweeping Promenade that would culminate in a Terrace overlooking the Lake. As Vaux said to a newspaper reporter in 1865, however, the architecture was always to be subordinate to the landscape: “Nature
first, 2nd and 3rd – architecture after awhile.”

Yet Olmsted and Vaux also understood the practical nature of a public park. There had to be places for people to gather, to experience the human variety the City had to offer, as well as the inspiration of nature. And they succeeded splendidly with Bethesda Terrace and what we now call the Mall (formerly the Promenade).

Park visitors stand on Bethesda’s Upper Terrace and look across the Lake at the rugged shoreline of the Ramble. They look down on the lawn Terrace and watch classes of new mothers doing aerobics, using strollers for counterpoises. Or they watch rowboats or even an occasional gondola pass across the Lake’s foreground. The scene is framed now as it was before the turn of the century – with two twenty-foot ornamental poles bearing gonfalons, colorful medieval-style banners. Leaving the Upper

Terrace, visitors can sit on benches built into the lawn’s Terrace walls and watch the human parade at eye-level.

The decorative elements for Bethesda Terrace itself were designed by English-born architect Jacob Wrey Mould. Reasserting the primacy of nature, Mould chose representative wildlife and seasonal design motifs. There are also carvings symbolic of day: a rising sun, a crowing cock. Night is represented by a lamp and book, a bat and owl, and a witch flying over a Jack-O-Lantern.

On the lower Terrace is one of the most photographed fountains in the world, “Angel of the Waters.” Bethesda Fountain, as it is often called, was the only sculpture commissioned as part of the original design of the Park. The artist, Emma Stebbins, was the first woman to receive a commission for a major public work in New York City; the fact that she was the sister
of Col. Henry G. Stebbins, the President of the Central Park Board of Commissioners, does not detract from her accomplishment or talent. The sculpture, dedicated in 1873, is a neoclassical winged female figure who symbolically blesses the water of the fountain with her one hand and carries a lily, the symbol of purity, in the other. The fountain celebrates the opening of the Croton Aqueduct, which brought fresh water to New Yorkers in 1842.

Pictures of the Bethesda Terrace 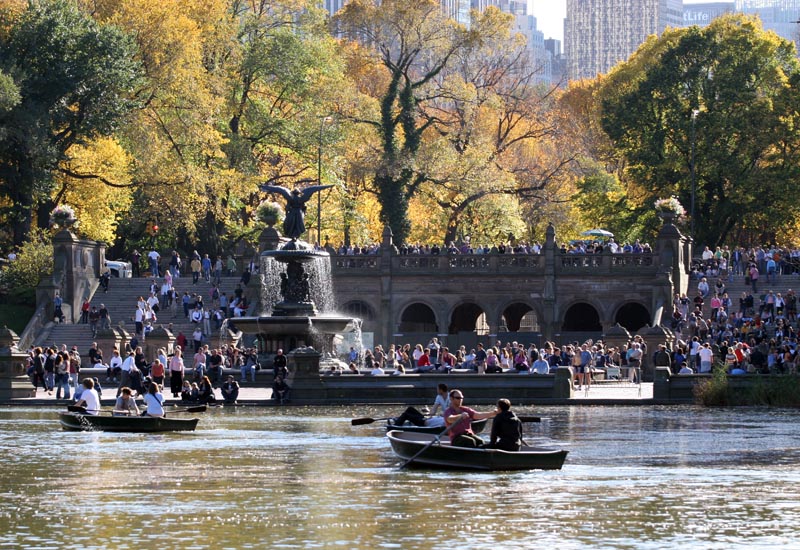 Bethesda Terrace in October of 2004.